The Indiana women’s basketball team has been rewarded for one of its best seasons in program history with a double bye for this week’s Big Ten Basketball Tournament.  IU reached win No. 23 with a regular season finale victory at Michigan on Sunday, tying a record set in the 2017-18 season during the program’s WNIT title run.

The No. 22/24 Hoosiers (23-7, 13-5) earned the No. 4 seed at the Big Ten Tournament and will play their first game on Friday at around 2:30 p.m. ET against either Rutgers, Wisconsin or Illinois.  The Scarlet Knights are the No. 5 seed.  The tournament is being held at Bankers Life Fieldhouse in Indianapolis, Ind.

The complete bracket and press release from the Big Ten are below. 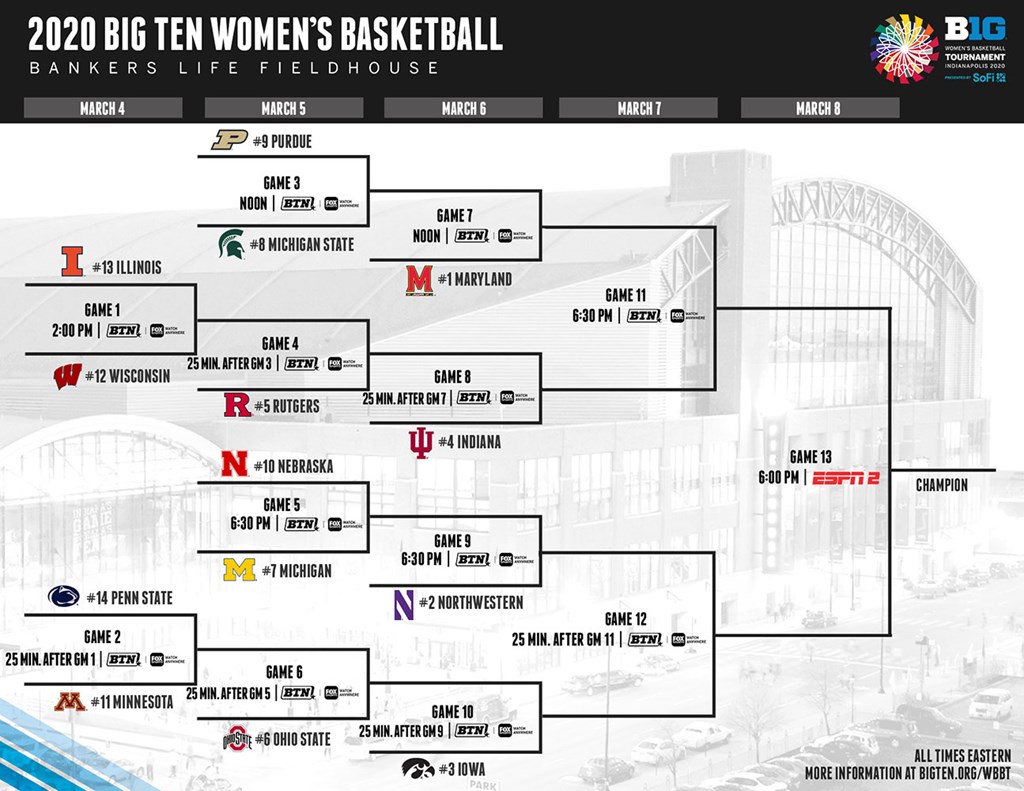 ROSEMONT, Ill. — The Big Ten Conference has announced the full bracket for the 27th Big Ten Women’s Basketball Tournament presented by SoFi that will take place March 4-8 at Bankers Life Fieldhouse in Indianapolis.

Maryland will open tournament play on Friday with a quarterfinal contest at noon (ET) against the winner of the second-round game between No. 8 seed Michigan State and No. 9 seed Purdue.

Northwestern (26-3, 16-2) is the No. 2 seed for this year’s Big Ten Tournament after the Wildcats earned a share of their second Big Ten title and first since 1989-90. NU, which has set school records for overall wins and conference wins, also has its highest-ever seed for the Big Ten Tournament and will tip off its postseason schedule at 6:30 p.m. (ET) Friday with a tournament quarterfinal game against the winner of the second-round matchup between No. 7 seed Michigan and 10th-seeded Nebraska.

Rounding out the top four seeds in this year’s Big Ten Tournament is Indiana (23-7, 13-5), which claimed the last of the tournament’s double-byes into the quarterfinal round. The Hoosiers, who have tied their school record for wins in a season in addition to winning a program-record 13 conference games, will open their Big Ten Tournament slate Friday afternoon in the quarterfinals, playing 25 minutes after Maryland’s game has concluded.

All-session and single-session tickets for the 2020 Big Ten Women’s Basketball Tournament are on sale at the Bankers Life Fieldhouse box office and Ticketmaster.com. Single-session ticket prices vary from $4 to $16 depending on the session, while all-session tickets are available for $75. Other than suites and the fan blocks for that university’s respective games (with tickets within fan blocks available through each school’s ticket office), the Big Ten Women’s Basketball Tournament features general admission seating, allowing fans to witness the action from the best available seats at Bankers Life Fieldhouse.

In addition, several special ticket offers and activities are lined up for this year’s Big Ten Women’s Basketball Tournament. For more information on this year’s tournament ancillary events and promotions, visit the Big Ten Tournament Central page at bigten.org/wbbt.