Indiana has diverted from its normal course and released its full nonconference schedule much earlier than it has in the past.

The Hoosiers will play seven nonconference games at Simon Skjodt Assembly Hall, and four away from home.

The schedule includes multiple opportunities for fans to see the Hoosiers away from Bloomington, including games in Cincinnati, Las Vegas, Kansas and Indianapolis.

Here is the full slate, via a release from IU Athletics on Friday morning.

“I think it’s important to prepare yourself with high-level competition as much as possible as your team gets ready for a 20-game Big Ten schedule,” said second-year coach Mike Woodson. “When you look at teams like North Carolina, Kansas, Arizona and Xavier, we can expect to be challenged very early. What you are telling recruits is that you can expect to play big time games in front of exceptional atmospheres and in top notch venues by playing at Indiana”

The first of those matchups for the Hoosiers will come in the third game of the season when it travels to Cincinnati to face Xavier on Friday, Nov. 18 as part of the Gavitt Games.  Xavier was rated 25th in ESPN’s initial poll as the teams last met in 2007 with IU holding a 4-1 series edge. IU will then host 2022 national runner up and No. 1 North Carolina on Wednesday, Nov. 30 in the ACC/Big Ten Challenge. IU won the previous two meetings at home in 2012 and 2016 but lost to the Tar Heels in the East Regional semifinals of the 2016 NCAA Tournament in Philadelphia.

The Hoosiers will face No. 18 Arizona for the first time on Saturday, Dec. 10 at the MGM Grand Garden Arena in Las Vegas.  IU will also travel to defending national champion and No. 10 Kansas where they will take on the Jayhawks for the first time since beating them in overtime in the 2016 Armed Forces Classic in Honolulu.  The Hoosiers hold an 8-6 advantage in the series and last played in Lawrence in 1993. IU defeated KU in the 1940 and 1953 NCAA Championships.

The regular season will open on Monday, Nov. 7 when the Hoosiers host OVC Tournament finalist Morehead State, who will visit Simon Skjodt Assembly Hall for the sixth time and first since 2015. Another home game will be on Thursday, Nov. 10 against Bethune Cookman, who is coached by a former NBA teammate of Woodson’s, Reggie Theus.

IU will once again host the Hoosier Classic. For the 48th-straight season the Hoosiers will play a game in Indianapolis when it takes on  Miami (OH) on Nov. 20 in tournament opener in Gainbridge Fieldhouse. . The Hoosiers will host Little Rock on Wednesday Nov. 23 and Jackson State, who is under the direction of first-year head coach and former NBA All-Star and 2016 NBA Champion Mo Williams, on Friday, Nov. 25.

IU will close out non-conference play at home on Tuesday, Dec. 20 against Elon and on Friday, Dec. 23 versus Kennesaw State.

The Cream and Crimson will host two exhibition games to start the season. The Hoosiers will face Marian on Saturday, Oct. 29 and St. Francis (Ind.) on Thursday, Nov. 3. The Big Ten schedule, tip times and television designations will be announced at a later date. 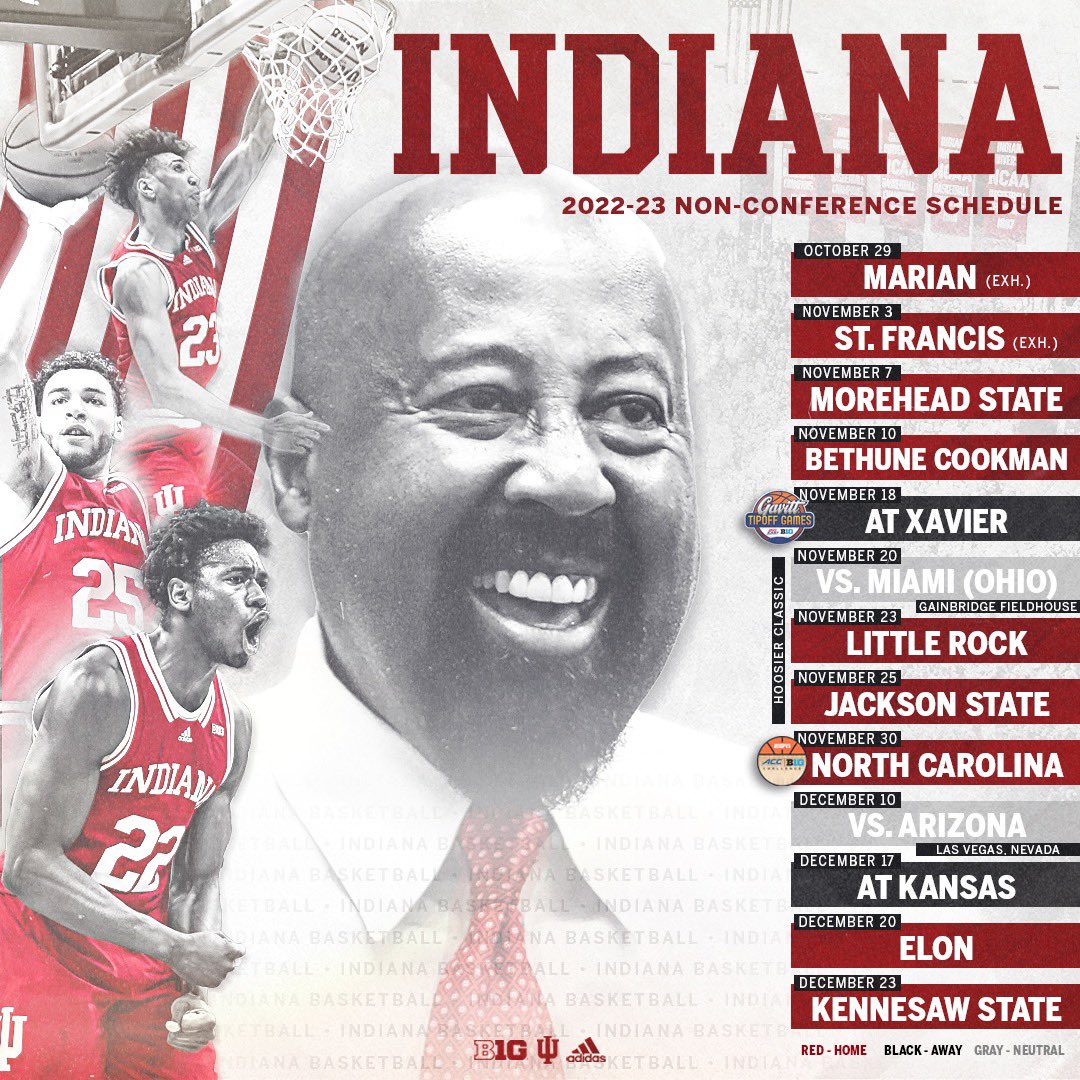