Defense was Indiana’s calling card in 2020, and the Hoosiers have been richly rewarded on that side of the ball.

IU had representation from all three levels of its defense on the All-Big Ten first team.

Linebacker Micah McFadden was named to the first team by both the coaches and the media.

Cornerback Tiawan Mullen, safety Jamar Johnson, and tackle Jerome Johnson were all named first team by the media, and second team by the coaches.

Cornerback Jaylin Williams was named second team by both the coaches and the media.

Safety Devon Matthews was named to the third team by both the coaches and the media.

See further below for more details on each player. 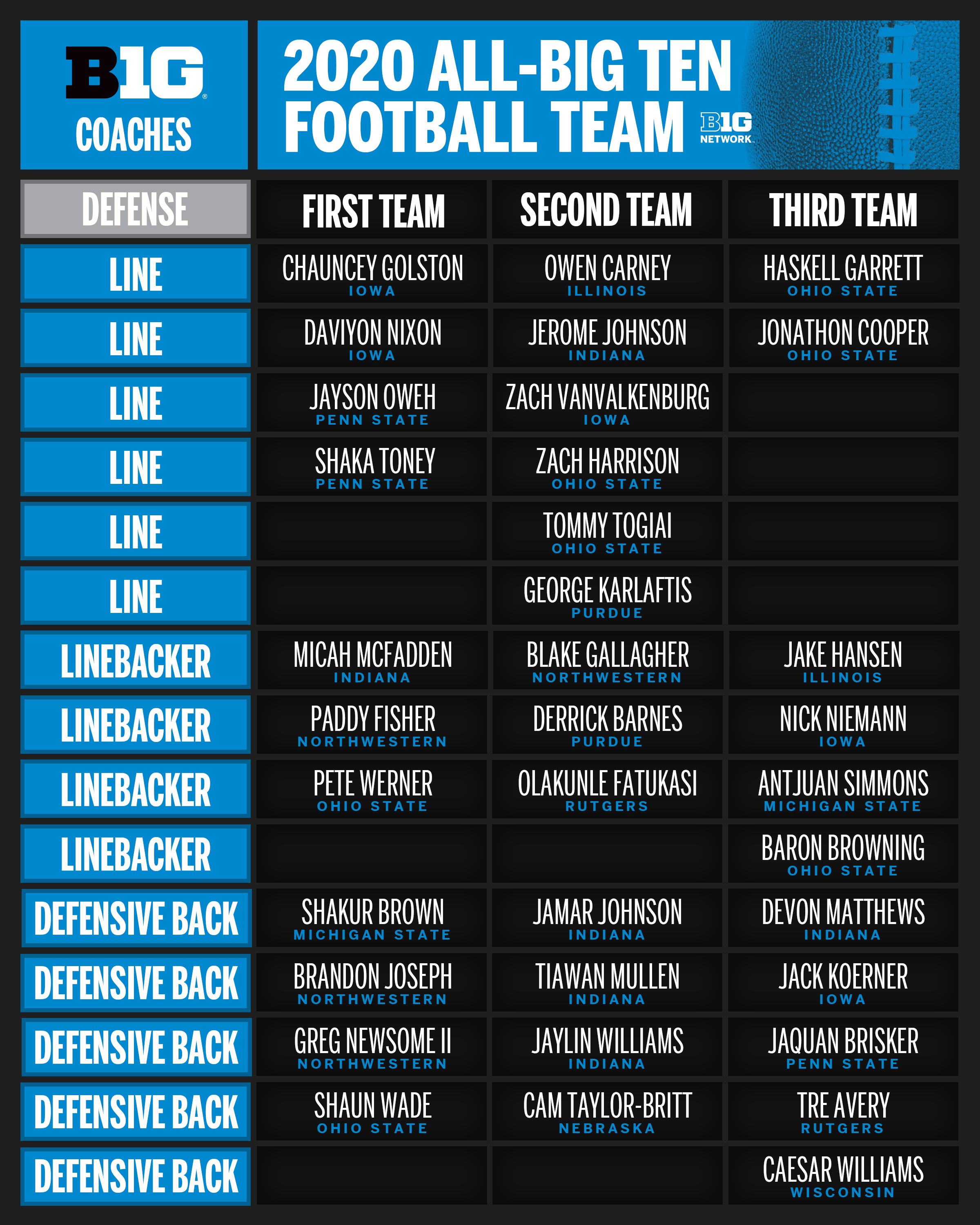 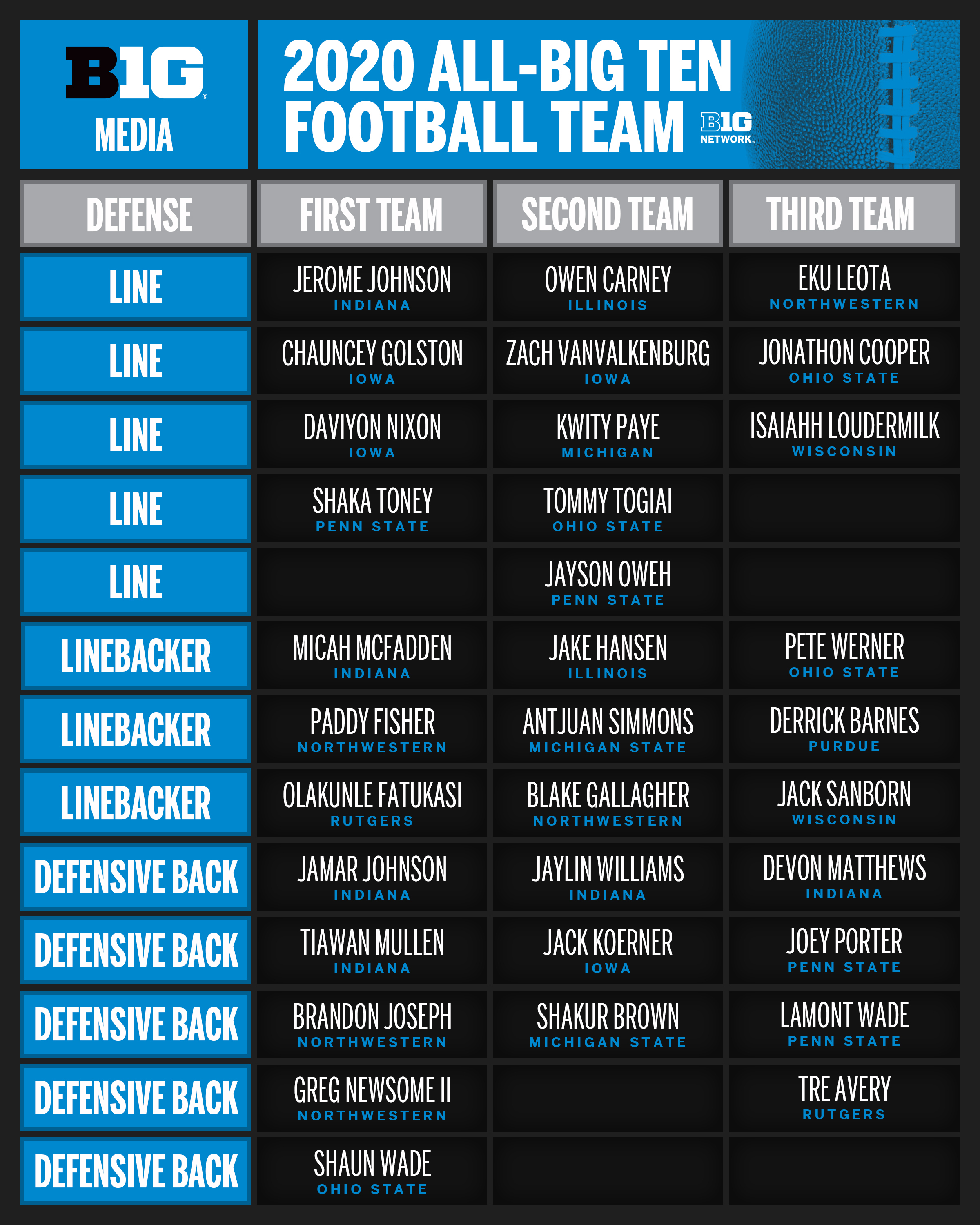 Junior Jamar Johnson is the first Hoosier first-teamer at safety since Eric Allen (1996).

Junior linebacker Cam Jones was recognized by the coaches and media as honorable mention.

Jerome Johnson is second on the Hoosiers with four sacks (T-7th in the Big Ten), and he leads the line with 4.5 stops for loss (T-2nd on the team) and 16 tackles to go along with one fumble recovery in six starts.

The Bassfield, Miss., native is the team’s active leader with 13.5 sacks (91 yards) and 21 TFLs (109 yards). Johnson has been named the program’s most outstanding lineman two years running and has started 27 of the last 28 games.

Jamar Johnson is tied with Williams atop the team with four interceptions (T-3rd in the Big Ten, T-5th nationally). Johnson, who has returned those picks 94 yards, leads IU with nine career takeaways and seven career interceptions.

The Sarasota, Fla., product is also tied for third on Indiana with 34 stops, tied for second with 25 solos, fifth with 3.5 tackles for loss and tied for third with three pass breakups to go along with one forced fumble.

He is second on the Hoosiers to Jamar Johnson with eight career takeaways (3 INT, 3 FF, 2 FR).

Williams recorded an interception in each of the first three games this year and matched Jamar Johnson with his fourth in the win over Maryland. He is second to Johnson with 93 return yards.

The Memphis, Tenn., native has six picks in his career, which ranks second to Johnson’s seven. In four starts (7 games), he has 23 tackles, 20 solo, one sack, two for loss, the four INTs, one pass breakup and two quarterback hurries.

Matthews shares third on the team with 34 stops and is fourth with 22 solos. He leads the way with six breakups (T-4th in the Big Ten) to go along with two tackles for loss, one sack, one interception and one quarterback hurry in seven starts.

Jones has 30 tackles, 20 solo, two sacks, three TFLs, a team-high four QBHs and one pass breakup in seven starts. He made his first career start in the 2020 opener and win over No. 8 Penn State, where he made a career-best seven tackles, one for loss, and matched a career-high with six solos.

All-Big Ten specialists and individual honors along with the Big Ten Coach of the Year will be announced on Thursday.