In coordination with The Big Ten conference, the IU basketball program has released television designations and tip times for most of Mike Woodson’s first season as head coach.  The season will begin at 6:30 p.m. Eastern on November 9 when IU hosts Eastern Michigan.

The television slate features just one game on subscription-based BTN Plus although that could change.  There are a handful of games for which the tip time is still to be determined including a Big Ten / ACC Challenge contest at Syracuse.

IU’s Nov. 27 home game against Marshall is one of the unknown start times.  Presumably the league will attempt to avoid overlap with the Old Oaken Bucket football game against Purdue on the same day.

The full release from IU Athletics including the updated schedule follows.

BLOOMINGTON, Ind. – The Mike Woodson Era at Indiana University will begin officially at 6:30 p.m., Tuesday, Nov. 9 against Eastern Michigan and will air on the Big Ten Network.  The Big Ten announced the majority of the TV designations and times for the upcoming season with IU scheduled to make 14 appearances on BTN, six on FS1 and ESPN/ESPN2 or ESPNU, three times on Fox and one appearance on CBS.  Simon Skjodt Assembly Hall has had at least one home game shown by one of the four major networks (NBC, ABC, CBS or Fox) every year since 1976.

Start times and television designations for the 2021 Big Ten/ACC Challenge will be announced at a later date and will be carried on the ESPN family of networks.

The Friday, Nov. 12 game against Northern Illinois could air on BTN+ though a decision on programming for BTN that night is pending and the game could be shown on BTN.  Three games are still awaiting official start times from BTN including Marshall on Nov. 27, Nebraska on Dec. 4 and UNC Asheville on Dec. 29.

The Gavitt Games home contest against St. John’s on Nov. 17 will be at 9 p.m. on FS1 and the Crossroads Classic matchup against Notre Dame in Indianapolis at Gainbridge Fieldhouse tips-off at 2:30 p.m.  IU will host Purdue Jan. 20 at 7 p.m. on FS1 with the return contest against the Boilermakers in West Lafayette scheduled for March 5 at Noon or 2 p.m.  Other home game key matchups include Jan. 23 against Michigan on CBS at either Noon or 3:30 p.m. and Senior Night against Rutgers on March 2 at 7 p.m. on BTN

Six games, including the Big Ten matchup with Ohio State (7 p.m. on FS1) on January 6, are part of  Mini-Series Ticket package, which is now on sale. The package is available for games in which our student season ticket holders are home for Thanksgiving and Christmas break. Main Level seats are available for $288, while Balcony tickets sell for $180.

The Mini-Series includes all three contests of the Hoosier Challenge with games against Louisiana (Nov. 21, 7:30 p.m. on BTN), Jackson State (Nov. 23, 7 p.m. on BTN), and Marshall (Nov. 27) over Thanksgiving week. Indiana will host a pair of games surrounding the Christmas holiday with matchups against Northern Kentucky (Dec. 22,  7 p.m. on BTN) and UNC Asheville (Dec. 29 on BTN).  Mini-series packages can be purchased at this link. 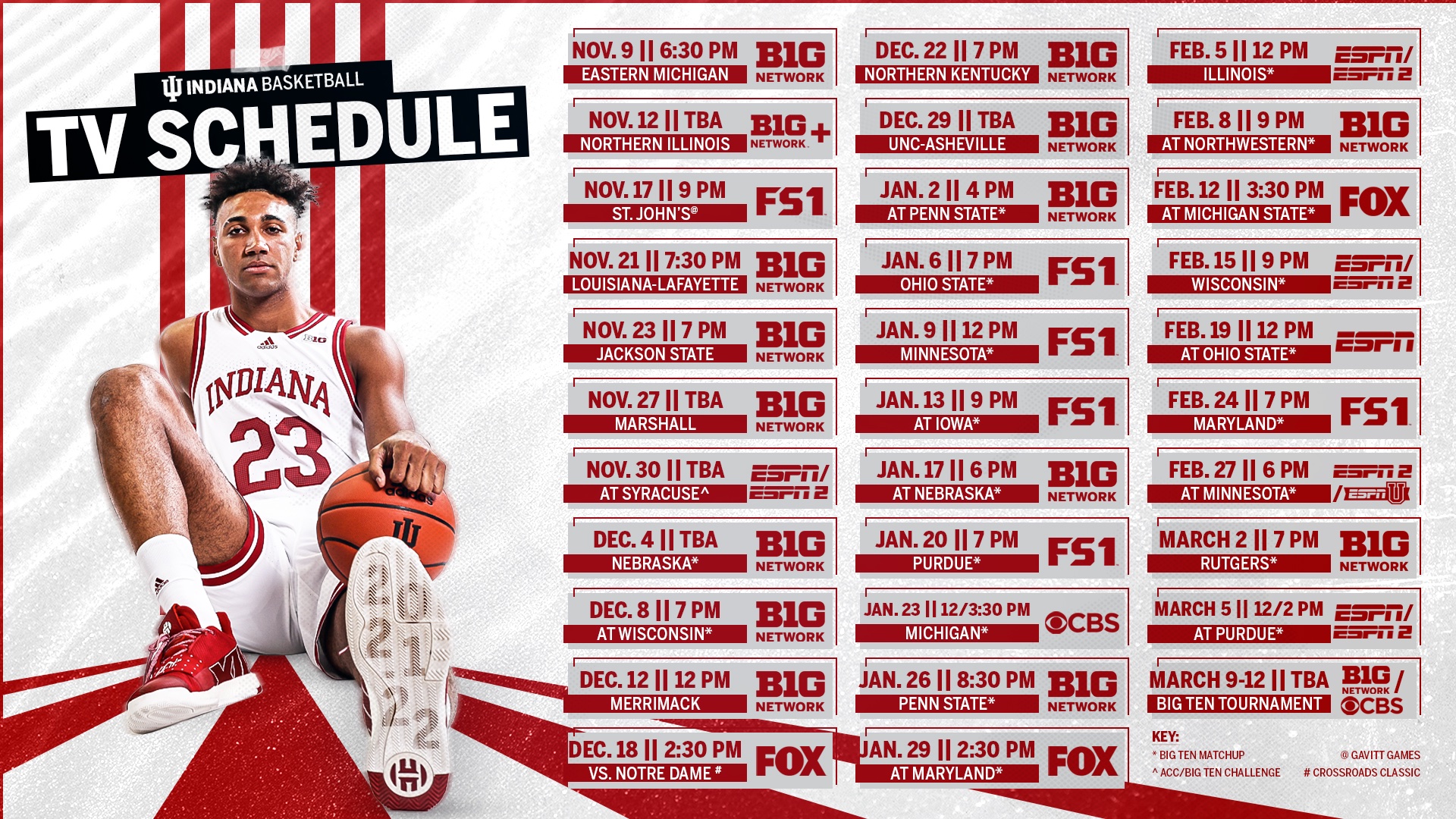