There are no days off with an all Big Ten schedule.

And while the rankings suggest Indiana is the better team in their matchup against Michigan, Hoosier fans know that any optimism should come with a healthy dose of caution.

That’s because any Hoosier fan under the age of 33 has never witnessed an IU win over Michigan.  It is a stretch of futility that is not only older than every player on the team, but also much of the staff.

With IU at No. 13 in the AP top-25, Sheridan and Wommack have already helped the Hoosiers achieve their highest spot in that poll since 1987.  Now they will look to knock out the Wolverines for the first time since that same year.

Tom Allen is 20-20 and now in his fourth full season as the head coach at Indiana.

Indiana intended to wear uniforms honoring the military on Saturday.

The special uniform design incorporates IU’s traditional markings on gray camouflage pants and jersey tops. In addition, the jersey sleeves include the United States flag and nine “battle” stars. One of the other special features that won’t be as obvious to spectators comes on the IU helmets. Inside the center stripe of each player’s helmet are names of crew members of the WWII battleship USS Indiana BB 58.

The IU trident logo on the helmets will be a unique version from the 1940s when the ship was in service.

After further consultation with the Big Ten Conference, the Indiana football program will not wear the “Salute to Service” uniforms as planned on Saturday due to a lack of contrast with the Michigan uniforms. IU looks forward to wearing the uniforms later in the season.

(Note:  Wisconsin vs. Purdue has been canceled) 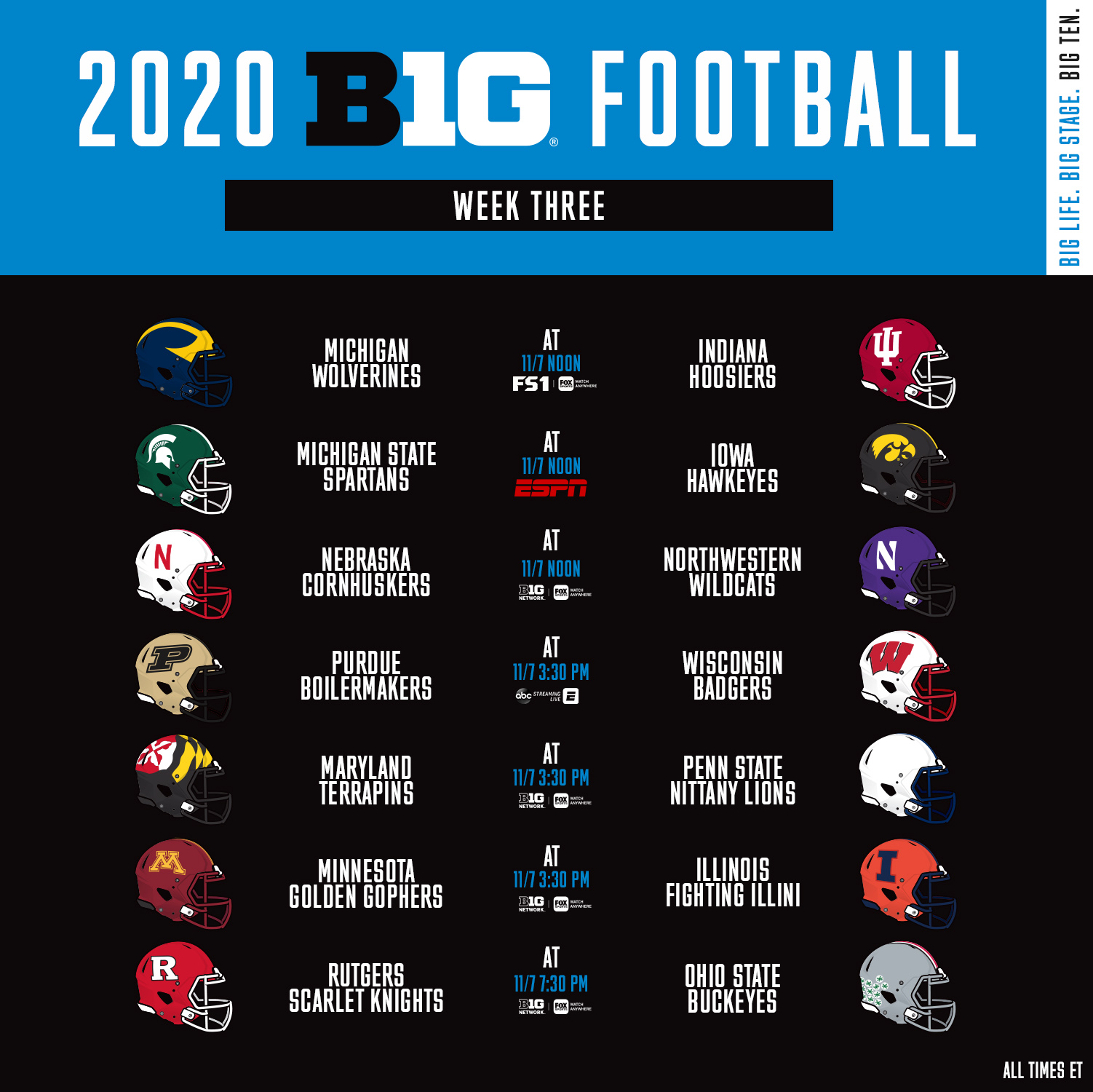 WHEN MICHIGAN HAS THE FOOTBALL

Michigan quarterback Joe Milton has been efficient and mistake free through two games.  The 6-foot-5 and 243 pound junior is 47-of-73 for 525 yards and a score with no interceptions.  A threat to run, and a load to bring down, Milton has added 20 totes for 111 yards and another TD.

While Milton hasn’t made many mistakes, the offense also hasn’t been particularly explosive either.  One reason is a young receiving group that is talented but to this point hasn’t delivered big plays.

Roman Wilson, Giles Jackson, Mike Sainristil, and Ronnie Bell are fast receivers but not big, which can limit the vertical passing game.  Indiana likes to put its secondary on an island while it dials up the pressure.  That backfired in 2019 against the Wolverines, but this year the weapons aren’t as potent.

Michigan has a four-headed monster in the running game with Zach Charbonnet, Hassan Haskins, Chris Evans, and Blake Corum all getting carries.  The unit has rushed for 279 rushing yards on 41 carries, but 135 came on two plays which creates concerns about their ability to sustain the ground game.

If there is a path to victory on Saturday it might go through Michigan’s inexperienced offensive line.  While anchored by tackle Jalen Mayfield, the Wolverines could be vulnerable up front — and that plays into an IU strength.  The Hoosier defensive tackles have been strong through the first two weeks and their two-deep rotation there should keep the pressure coming.

If Indiana’s tackles can stuff the run and make Milton beat them from the pocket, the Hoosiers might have a formula for victory.

WHEN INDIANA HAS THE FOOTBALL

Michigan’s defense has struggled with the vertical passing game early in the season as a young secondary has lost one-on-one matchups repeatedly.  If Indiana can give quarterback Michael Penix enough time to take shots down the field the Hoosiers could exploit the defensive backs with veteran receivers Whop Philyor and Ty Fryfogle, along with tight end Peyton Hendershot.

But that won’t be easy.

The matchups to watch will be Indiana’s tackles against Michigan’s defensive ends.  Michigan generates a lot of pressure from their edge rushers, while tackles Caleb Jones and Matthew Bedford have struggled at times for IU.

Both teams are suspect in the interior of their respective lines.  Indiana will need to stick with the inside running game with the hope that it can keep the Wolverines honest.  The Hoosiers have not been effective to this point running the football, but if Stevie Scott and Sampson James can do enough to generate short yardage situations on third down it will go a long way.

The availability of Indiana’s veteran receivers Miles Marshall and David Ellis will be a big story line to watch as Penix and the Hoosiers need all hands on deck to attack the vulnerable secondary.

As always, special teams and mistakes will play a role.  The Wolverines are one of the most penalized teams in the Big Ten, while their return game led by Giles Jackson is always a big play threat.

Meanwhile, Indiana has a Big Ten leading turnover margin while Michigan hasn’t turned it over yet this year.  Something obviously has to give there.

Who is more motivated?

Michigan after embarrassing themselves against their rival, or Indiana, coming in as an underdog despite the higher ranking?

We expect a good, clean, physical game that could go either way.

We were wrong about Penn State.  Let’s see if we can bring you another upset.