Indiana head football coach Tom Allen announced the hiring of Craig Johnson as the program’s associate head coach and running backs coach on Monday. Johnson brings 38 years of experience to Bloomington, including 20 in the collegiate and 18 in the professional ranks.

“I want to welcome Craig, his wife, Darlene, and their daughters, Shelby and Sydney, to the IU Football family,” Allen said in a release from IU. “Craig is the total package. His experience and character fit our culture perfectly and will benefit greatly the young men in our program.”

“I am thrilled to be at Indiana University,” Johnson said. “I plan to bring a wealth of knowledge both on and off the field. It has been a blessing to have worked with some of the best football athletes at the collegiate and professional levels, and we are looking forward to great success at IU. Go Hoosiers!”

Johnson oversaw running backs with the New York Giants from 2014-19. Barkley became the first running back in franchise history with 1,000 yards in each of his first two campaigns.

In 2018, Barkley led the NFL with 2,028 yards from scrimmage and set Giants rookie records with 1,307 rushing yards, 15 total touchdowns, and 91 receptions, which tied Odell Beckham Jr.

Johnson spent 2011-13 as the quarterbacks coach with the Minnesota Vikings, where he tutored Christian Ponder and Matt Cassel. 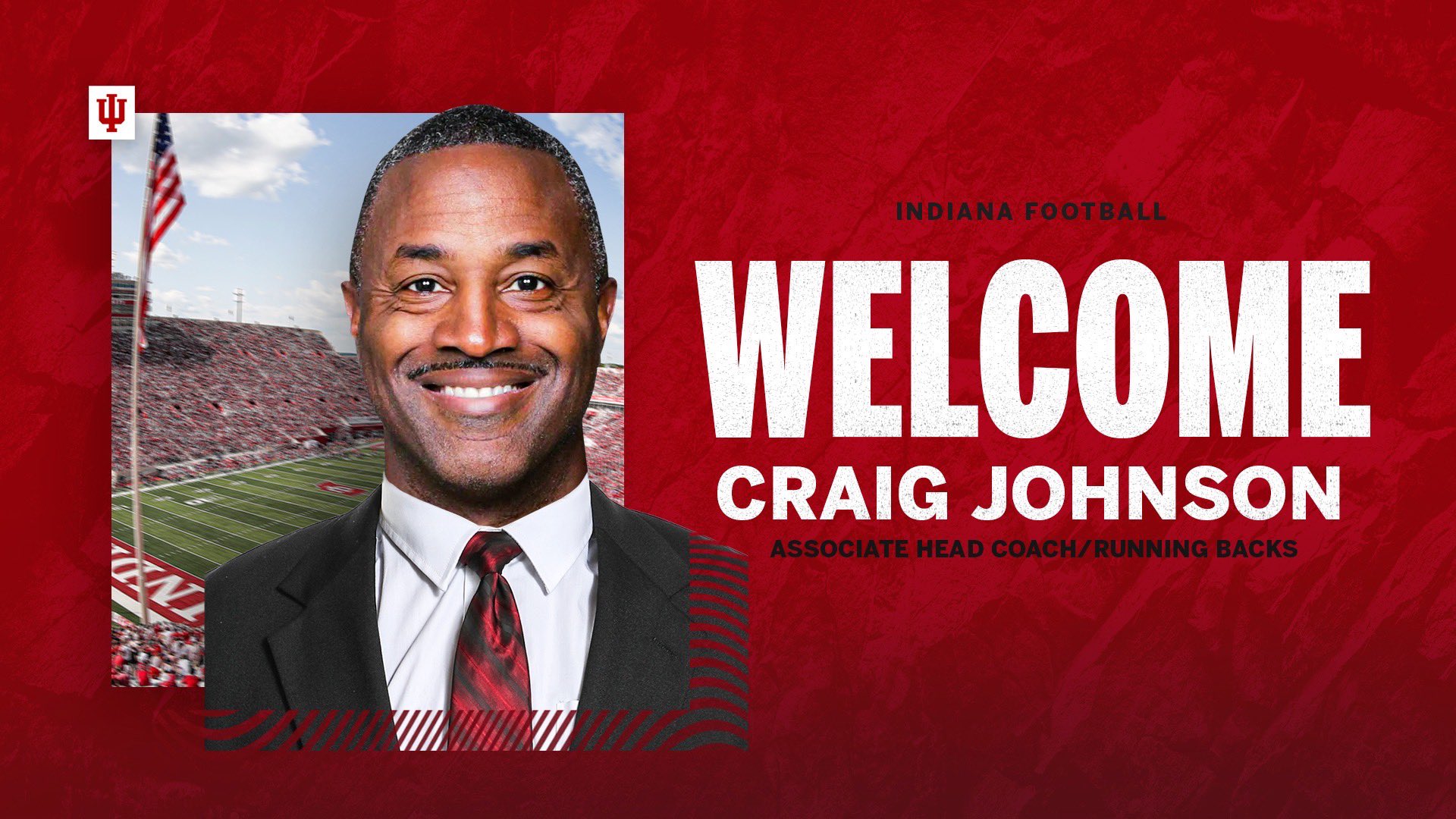 Johnson enjoyed 11 years with the Tennessee Titans (2000-2010). He opened his time in Nashville as offensive quality control coach/quarterbacks (2000-01) before taking over as quarterbacks coach (2002-09) and being promoted to assistant head coach and running backs coach (2010). The Titans won three AFC South championships and reached the playoffs five times during his tenure.

Chris Johnson earned his third-straight Pro Bowl honor in 2010. He rushed for 1,364 yards and 11 touchdowns to go along with a team-leading 44 catches.

Steve McNair, Vince Young, and Kerry Collins each reached the Pro Bowl under Johnson’s direction from 2002-09. McNair shared the NFL’s Most Valuable Player honors with Peyton Manning in 2003, and he made the Pro Bowl in 2000, 2003, and 2005.

Young was named the league’s Offensive Rookie of the Year in 2006. Collins took over for an injured Young in the 2008 opener, led Tennessee to a 12-3 record as starter, and received a Pro Bowl nod.

Johnson worked at the University of Maryland from 1997-99. He captained the quarterbacks all three campaigns and was offensive coordinator in 1997 and 1998.

At Northwestern University from 1992-96, Johnson coached quarterbacks after three seasons as offensive coordinator and quarterbacks coach at Virginia Military Institute. VMI led the country in rushing in 1991.

Northwestern won consecutive Big Ten titles (1995-96) for the first time in program history. The 1995 Wildcats posted their first winning season since 1971 and captured their first trip to the Rose Bowl since 1949. Quarterback Steve Schnur claimed first-team All-B1G accolades and was the conference’s MVP runner-up in 1996.

Johnson managed the running backs at Rutgers University (1986-88) and the fullbacks at Army West Point (1985). He kicked off his coaching career as a graduate assistant at his alma mater, the University of Wyoming (1983), followed by a stop at the University of Arkansas (1984).

Craig and his wife, Darlene, have two daughters, Shelby and Sydney.