The Daily Hoosier is live at Nippert Stadium in Cincinnati for Indiana (3-0) vs. Cincinnati (2-1)

The game will be televised on ESPN2 and kicks off at around 3:30 p.m. Eastern. 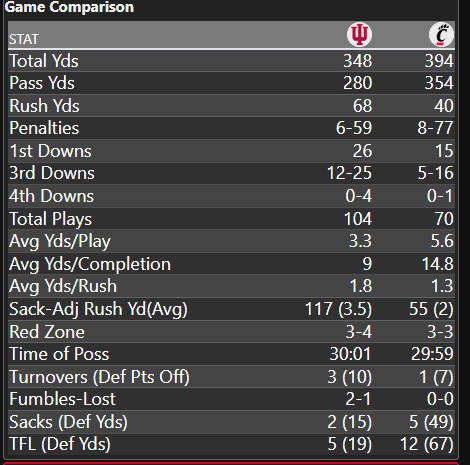 Cincinnati with the ball with under five minutes left, still up 38-24.  Indiana is using its timeouts.

IU ran into the punter which gave UC a new set of downs, but IU stopped the Bearcats on 4th down at the IU 38, where the Hoosiers will take over with 6:46 left.  Still 38-24 UC.

Quarter starts with Cincinnati having the ball at their own 8, 2nd and 7.

Indiana outgained Cincinnati 103-32 in the third quarter, but they only chipped away 7 of the massive 28 point halftime deficit.

Indiana goes for it on 4th and goal and comes up empty.  Cincinnati ball at their own 5, :58 second left in the third, 38-17 Bearcats.

Indiana’s defense has responded so far, with a takeaway, and then two straight three-and-outs.  7:42 left in the third, IU ball at their own 25.  1st down.

INTERCEPTION by INDIANA:  Tiawan Mullen with the pick on Cincinnati’s opening drive.  1st and 10 Hoosiers at the 49

Cincinnati leads 38-10 at halftime.  Here are the stats at the break: 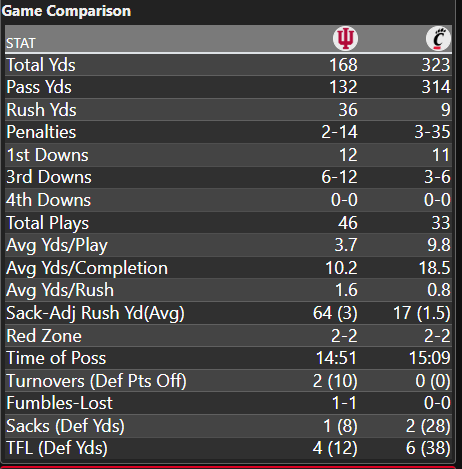 Indiana with the ball 1st down at the UC 39.  Critical drive coming up with 9:11 left in the quarter.  Drive set up by a Lance Bryant sack and a 3-and-out by the Bearcats.

TOUCHDOWN CINCINNATI:  Bearcats go 6 plays, 64 yards.  17-3 UC, 12:36 left in the half.  Score set up by another big mistake in the defensive backfield as Tre Tucker got behind the safeties for a 45-yard pass play.

Indiana ends the quarter on a 3-play, -20 yard drive and will punt from their own five to open the second.

TOUCHDOWN CINCINNATI:  Bearcats go 75 yards on one play.  A coverage mistake in the defensive backfield set up the Ben Bryant to Tyler Scott bomb.  1:00 left.

INTERCEPTION by CINCINNATI:  Overthrow by Connor Bazelak into double coverage give UC the ball at the IU six.  First and goal.

Indiana picks up 33 yards on its first drive and is able to pin Cincinnati inside its own 10 after punting.

Cincinnati won the toss and deferred to the second half.

The Daily Hoosier’s Patrick Felts is down on the field for pre-game.

A few injury notes as the players make their way out on the field:

Note:  Because Indiana is on the road, they have a limited travel party and thus most injured players stayed home.