Indiana will get a chance to avenge one of its worst losses of the season on Thursday.

The Hoosiers have drawn Michigan in the 8/9 game of the Big Ten Tournament.  That contest tips at 11:30 a.m. Eastern on Thursday morning at Gainbridge Fieldhouse in Indianapolis and will be televised by the Big Ten Network.

The Wolverines (17-13, 11-9) delivered IU’s worst loss of the season by margin when they beat the Hoosiers 80-62 on Jan. 23 in Bloomington.  IU had no answers for Michigan big man Hunter Dickinson, who scored 25 points, including 18 in the second half. The 7-foot-1 Dickinson was 9-of-12 from the field including 3-of-4 from three.

The game will mark the return of Michigan head coach Juwan Howard, who has been suspended from the last five games after he slapped Wisconsin coach Greg Gard during a post-game confrontation.

The Hoosiers (18-12, 9-11) likely need to win at least the game against Michigan to keep their slim NCAA Tournament hopes alive.

The winner of the 8/9 game will face the No. 1 seed on Friday.  After Wisconsin lost and Illinois won on Sunday, the Illini claimed the top seed in the tournament.  That means Indiana must avenge its two worst losses of the season to advance to the weekend.  Illinois defeated IU 74-57 on Feb. 5. 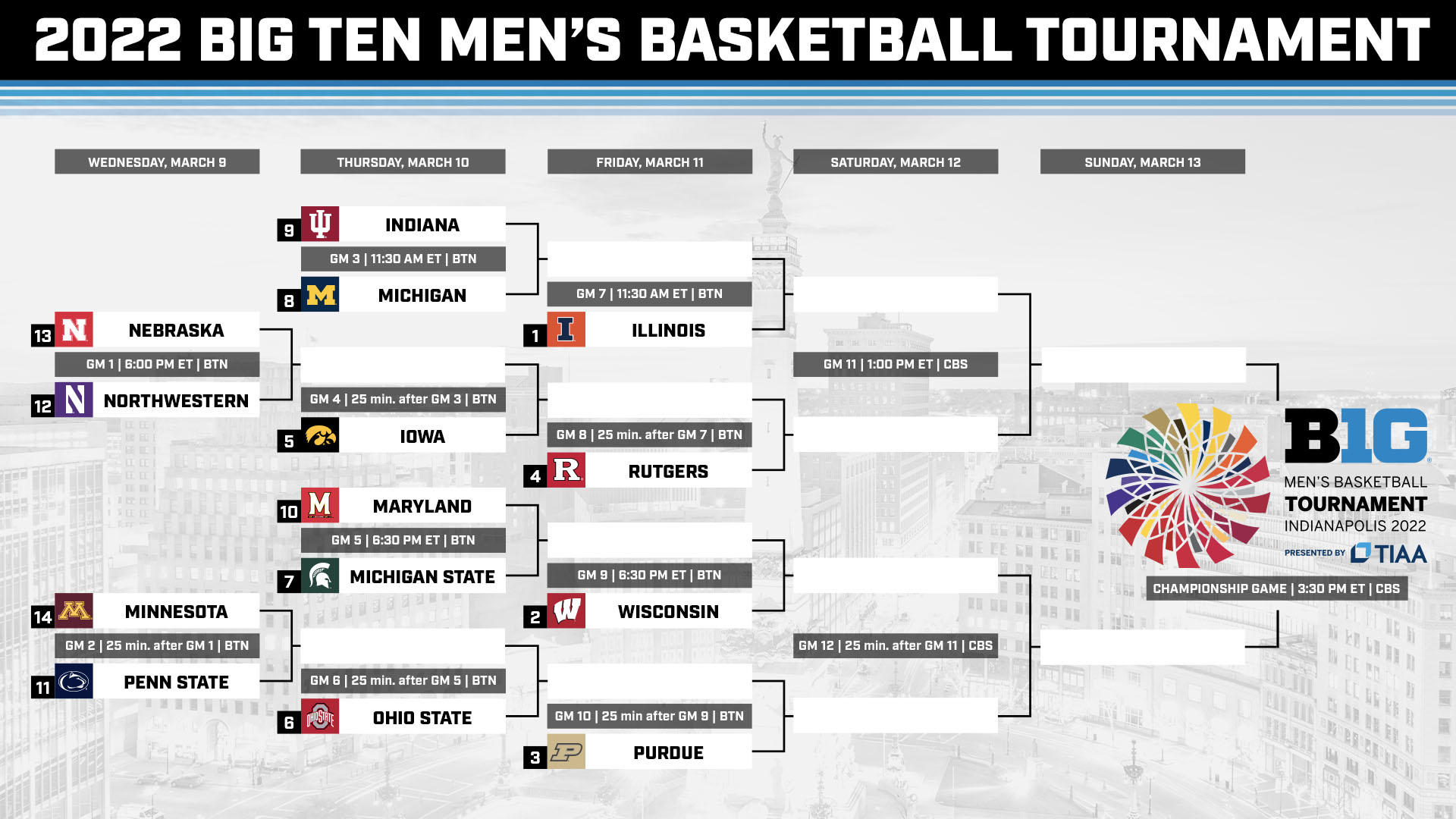 Here is the full release from the Big Ten:

ROSEMONT, Ill. — The Big Ten Conference announced the bracket for the 2022 Big Ten Men’s Basketball Tournament presented by TIAA that will take place March 9-13 at Gainbridge Fieldhouse in Indianapolis.

The Thursday winners will move on to play the tournament’s top four seeds on Friday in the quarterfinals.

The Big Ten Network (BTN) will televise the tournament’s first 10 games, with coverage spanning the first round of the tournament through the quarterfinals. CBS Sports will once again broadcast the semifinals and final. All BTN on-air games can be streamed via the web, smartphones, tablets, and connected devices through the FOX Sports App, while the CBS Sports broadcasts will also be available to stream live on Paramount+.

A complete list of tournament seedings can be found below and in the attached tournament bracket.