For the third time this season, Indiana will wear special uniforms on Thursday evening when the Hoosiers host Maryland.

Below is a release from IU Athletics on the story behind Indiana’s “Honoring Black Excellence” uniforms.

The jerseys are part of adidas’ Honoring Black Excellence (HBE) initiative, celebrating the achievements of Black individuals and Black culture as a whole. HBE pays homage and recognizes individuals who are positively impacting others’ lives within and around their communities.

The special HBE uniforms being worn against the Terrapins come on the heels of the replica 1987 NCAA Championship season design that the Hoosiers wore in January, and the Cream uniform that Coach Mike Woodson’s team wore earlier this month.

“We greatly appreciate our partnership with adidas and welcome the opportunity to team with them to feature three alternate uniforms during the 2021-22 season,” said IU Vice President and Director of Intercollegiate Athletics Scott Dolson. “Not only do these special uniforms recognize the contributions of so many both inside and outside our program, but they also offer something different and special to our current student-athletes.”

The adidas inspired uniforms will have two distinctive elements, a flower design and an HBE patch.

The floral design will prominently feature the Indiana state flower, the peony, as a symbolic representation of giving someone their flower, an expression that represents showing someone how much they are appreciated and cherished.

The purple and orange HBE patch on the back of the uniform will represent ‘rich with purpose’. The colors for Honoring Black Excellence were chosen for their impact and historical symbolism — Purple to celebrate the regal past of Black kings and queens, and Orange to represent the sacrifice and strength in spirit that never dies.

There is no picture of sport, culture, or adidas without the Black community. Honoring Black Excellence is an adidas initiative celebrating the achievements of Black individuals, and Black culture as a whole. 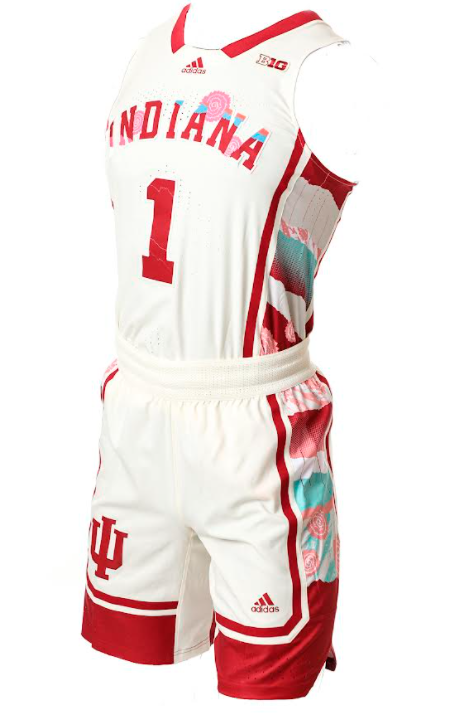