Former USC running back Stephen Carr announced on Sunday that he is transferring to Indiana.  He broke the news on his Twitter page.

“I want to thank USC, Coach Helton and the entire coaching staff, the faculty and all my teammates over the years for believing in me, helping and allowing me the opportunity to live out a childhood dream of being a Trojan,” Carr wrote in a graphic attached to his post.  “Playing in the Coliseum is one of the greatest things I have ever done in my life.  Being able to play for and with my Trojan family, gave me the best experience and understanding of what the phrase “FIGHT ON” is truly about.  Also, I’m proud to be a Trojan graduate!  It’s all been a BLESSING.  This experience has showed me more than I could’ve imagined and words cannot explain.  I will never forget what was accomplished here, and I will never forget the great energy that moves through the campus of USC.

“However, with my last year of eligibility – I have chosen to transfer to Indiana University and finish my college career playing to my full potential and helping IU to a Big Ten Championship.”

Carr came to USC as the nation’s No. 3 running back in the 2017 class, according to the 247Sports Composite. A 5-star prospect out of Summit High School in Fontana, California, Carr played for then Trojans’ and now IU running backs coach Deland McCullough during his freshman campaign.

Listed at 6-foot and 215 pounds, Carr has rushed for 1,329 yards on 264 carries (5.0 average) with 12 touchdowns in four seasons with USC. Also proficient as a pass catcher, he has amassed 57 receptions for 421 yards with another score.  Carr also returned 15 kickoffs for 321 yards.  The Gardena, Calif. product has appeared in 35 games and started in six for the Trojans.  He made 2017 All-Pac-12 honorable mention in his lone season with McCullough.

2020 was Carr’s senior season, but he has another year of eligibility remaining due to a special rule passed by the NCAA as a result of the COVID-19 pandemic.

Carr fills a need on the IU roster.  Indiana is not particularly deep when it comes to experienced running backs.  The Hoosiers lost Stevie Scott during the offseason after he decided to forego his remaining eligibility and enter the NFL Draft.  Now along with Carr, Sampson James and Tim Baldwin are expected to be at the top of running back depth chart going into fall camp. 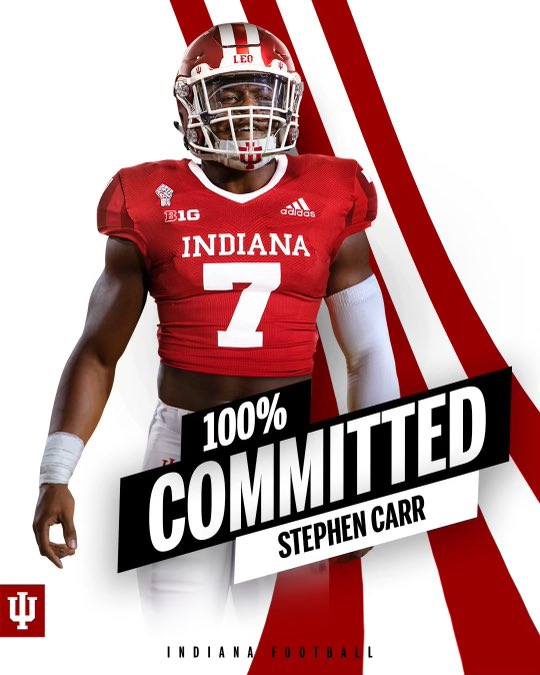