Dual-sport college athletes are on the endangered species list.  With traveling teams before middle school, and specialization as strong as ever, most have been weeded out by high school.

Of course they are still out there, and some are quite gifted at multiple sports.  Take Indiana football target (and basketball target?) David Bell.  A senior wide receiver out of Indianapolis Warren Central, Bell is the 81st ranked high school football player in the country in the class of 2019 according to the 247Sports Composite.

Of course this is Indiana, so most know him just as well, if not better for this play in the 2018 Indiana high school basketball tournament that ended Romeo Langford’s career and propelled Bell and Warren Central to the state finals:

But let there be no doubt, Bell is a football star first at Warren.  He had six catches for 73 yards in the No. 1 ranked Warriors season opening win at Center Grove.  He also played defense and had a big strip sack on that side of the ball.

Could Bell be the next Hoosier to play more than one sport?  It’s possible.  Bell is down to a list of five schools that includes IU.  There have reportedly been conversations with Archie Miller about that possibility.

While we await Bell’s decision, let’s take a look back at some of the more memorable two-sport athletes in Hoosier history.

Of course you know him as a star guard on the legendary 1976 undefeated basketball team, but Buckner was talented on the gridiron as well.  He led Lee Corso’s Hoosiers in interceptions as a freshman and sophomore.  For his junior season he focused exclusively on basketball, and you know how that story ends.  What you may not know is that he was still drafted in the 1976 NFL Draft, in the 14th round by Washington. 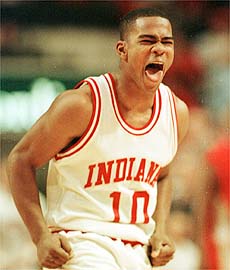 Randle El is a IU Hall of Famer for his prowess on the football field, but he dabbled in some hoops as well.  He played in 11 games during the 1998-99 season, averaging 1.5 points and 1 assist.  He appeared in both of IU’s NCAA tournament games that season.

As if that wasn’t enough, Randle El was also drafted out of high school by the Chicago Cubs in the 14th round.  He played baseball for IU during the 2000 season.

The four time MLB all-star and Cincinnati Reds Hall of Famer was also a key part of one of the best football teams in Hoosier history.  Playing end, Kluszewski caught 10 passes and scored three touchdowns in IU’s undefeated 1945 season.

He hit .443 in his only season with the IU baseball team.  That batting average was a program record that stood for decades.

James Hardy was a first team All-Big Ten wide receiver in 2007.  While with IU he became the Hoosiers’ all-time receiving leader in touchdowns (36), yards (2,690) and receptions (186).  He was drafted in the 2nd round of the NFL Draft by Buffalo.

Hardy also suited up in the candy-stripe pants during the 2004-05 basketball season.  The Fort Wayne native appeared in 23 games and averaged 1.7 points and 1.8 rebounds per game.

Stoyanovich was a member of the IU soccer team during his time at IU, but he was best known as the kicker for the Hoosier football team.  He was a 2nd team All-American in 1987 and held several IU records when he graduated.  He went on to a 12 year NFL career.

As an athlete, Dakich is best known for guarding Michael Jordan in IU’s 1984 NCAA tournament upset victory of No. 1 ranked North Carolina.  He was a team captain during his junior and senior seasons.  He also very briefly served as the interim head coach of the basketball team in 2008.  But did you know he played baseball for the Hoosiers as well?

Cameron (25) was on that memorable 1983-84 Hoosier team with Dakich.  He was also a quarterback on the IU football team and would later go on to be the IU head football coach and a long-time NFL coach.

Johnson played for the Cincinnati Bengals for seven years.  He was also a standout basketball player at IU, averaging 13.1 points and 9.8 rebounds over his career in the late 1960s.

Our list admittedly suffers from recency bias.  There was a time when many if not most of the great athletes played multiple sports in college.  Here are some of the more noteworthy IU Hall of Fame dual-sport performers.