It stopped me in my tracks when he said it.

No, he didn’t mean it the way it sounds, but to even find those words tells you something about where Archie Miller is with this Indiana basketball team right now.  This is what the second year head coach said after the Thursday night loss to Iowa, his team’s eighth in nine games —

“But I wasn’t terribly disappointed in our team tonight.”

After a loss to Iowa?  In Bloomington?

Right or wrong, some of us have been around long enough to be startled by that remark, however out of context I’ve got it so far.

There was a time when losses at home to teams like Iowa just didn’t happen.  Or at least it seemed that way.

And no, I am not referring to the glory days under “Bobby.”  Of course Assembly Hall was a veritable pit of misery for visiting teams back then, but please, spare me the glory days, okay?

The reality is, you don’t even have to go back that far.  The Hoosiers were undefeated at home as recently as the 2015-16 season.  The postseason-less 2013-14 Hoosiers knocked off four ranked teams in Bloomington during Big Ten play, spawning this memorable sign in the student section: 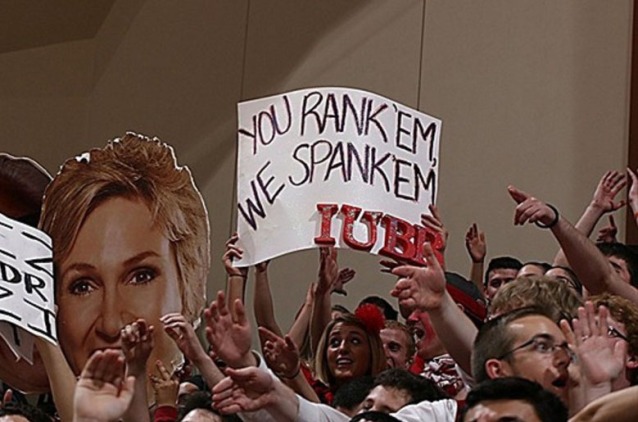 Now when the Hoosiers lose on the Branch McCracken Court to good but not great teams?  Meh.  Not terribly disappointing.

For the sake of clarity — when I say “teams like Iowa” — that should not be construed as some kind of veiled cheap shot at the Hawkeyes.  They are better than Indiana this year.  I don’t think there is any denying that.  They really are a top 25 team.  But historically speaking, coming into Bloomington as merely a marginally better team than Indiana has meant that you were leaving with a loss.

And let’s be perfectly clear here.  Miller was referring to his team’s performance, not the outcome.  As inextricable as those things tend to be, you have to be able to separate them.  I get that.

Of course he is right — this really wasn’t a bad performance by Indiana.  I would agree that it wasn’t terribly disappointing, especially in light of Juwan Morgan only playing 22 minutes due to foul trouble.

But it wasn’t terribly encouraging either.  And that’s the real point here.  When Indiana starts losing routinely at home to “teams like Iowa,” and the Hoosiers really didn’t play that bad, then there is really only one takeaway:

Or said differently, they are playing as good as you should reasonably expect them to play — which clearly isn’t good enough.

Miller’s comments don’t reflect complacency.  He hasn’t thrown in the towel.  If you watch his full post-game press conference, and specifically his mannerisms and demeanor, it is abundantly clear that he isn’t content with where things stand.  These losses ARE terribly disappointing for him.

The 40 year old coach is aging in dog years trying to make this thing work.

But all things considered, Miller is right.  As much as the losses sting, the performance of his team wasn’t terribly disappointing.

Is that really the standard around here?  Finding positive sentiments after home losses against traditionally mediocre Big Ten teams?

Miller was in no way stating or even implying that this is acceptable long term.

And it sounds like Miller has relegated himself to that reality, if not the results.  No one is closer to the pulse of this team and the reasonable expectations for this season right now.

While he isn’t content or complacent with where things stand, he is telling us that a good effort by his team just isn’t going to always translate to wins.  The harsh reality bottom line?

While the head coach hasn’t thrown in the towel, some of you, no thousands of you, clearly have.

Public address announcer Chuck Crabb really needs to stop referencing Indiana’s “sold out” home court as the less than capacity crowd exits the building after the final buzzer.  It’s an insult to what the 14,000 or so that are typically there see with their own eyes every game.

“Sold out” Simon Skjodt Assembly Hall used to be a very difficult place to play.  It’s not anymore, and complacent fans are a part of the problem.

Right now some of you are thinking of your excuses as to why you don’t go.  Too late?  Too cold?  Too rainy?  Too far?

Something about flooding in Bloomington?  Let’s face it, you were staying home come hell or high water.

Perhaps you just wouldn’t be too terribly disappointed if you watched from the comforts of your couch instead.

IU has now lost three in a row on its venerable home court, with absolutely no help from the thousands of “fans” that couldn’t be bothered to show up for a game against a top 20 team.

And if we don’t?  Meh.  Not terribly disappointing I guess.

Please consider supporting The Daily Hoosier by shopping on Amazon via this link to the Amazon home page or through the ad below.